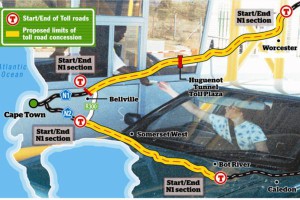 Tuesday, 11 August 2015, will mark the first day of the City of Cape Town’s long awaited application to the Western Cape High Court for reviewing and setting aside SANRAL’s proposed tolling of portions of the N1 and N2 freeways.

Our application could be regarded as the trial of the century as the outcome will have far-reaching consequences for the future of our city and the generations who live here for decades to come.

The application has been set down for argument over a number of days and is the culmination of a commitment by this government to do whatever it takes to prevent SANRAL from imposing an unjust, unwarranted and devastating tolling decision on our city. It took four years of hard work and court preparation by our staff, our legal team and a team of experts.

Since we took the decision to declare an intergovernmental dispute with SANRAL and the National Ministers of Transport and Environmental Affairs, we have witnessed and experienced unprecedented efforts by SANRAL to conceal the truth from a democratically elected government and the people we were elected to serve.

SANRAL’s actions were inconsistent with our Constitution and the principles of transparency and collaboration.

It required extraordinary efforts on our part, including an application to the Supreme Court of Appeal, to get to the truth of this proposed tolling project, and to be able to share that truth with the residents of Cape Town.

SANRAL was determined to withhold facts, such as the real costs of the tolling of the N1 and N2 freeways; the proposed toll fees to be paid by motorists; and the terms of the proposed agreement with the preferred bidder, Protea Parkways Consortium (PPC). The application for secrecy that SANRAL and PPC brought to the court would have had far reaching implications for our rights to access to information and media freedom if we had left it unchallenged.

Our fight for access to this information was motivated by the need to fully comprehend the likely impact of tolling the N1 and N2 on our city and our residents so that we could properly challenge the decisions that were made. It was also motivated by our commitment to protect the values of our democracy. We gained access to this information only after we brought another successful application in the High Court to compel SANRAL to provide it to us.

Today we will begin to present our case for a court order that essentially scraps the tolling of the N1 and N2. Our case against SANRAL is complex and contained in court papers that run into thousands of pages of reports and documents.

In the simplest terms we will argue that:
· The decision of the then National Minister for the Environment to provide an environmental authorisation for the tolling without considering the socio-economic impact of tolling, as he was required to do, was unlawful

· The SANRAL Board never made the decision to declare the N1 and N2 as toll roads as it was required to do. By implication, we will argue that the decision to toll was made by the CEO of SANRAL who was unauthorised to do so

· In 2013 SANRAL was about to enter into a contract with PPC which would have been reckless and irrational. The City obtained an interim order preventing that agreement being signed

· One example is the proposed agreement requires SANRAL to reimburse PPC for any loss of revenue caused by the National Minister setting toll tariffs at rates lower than PPC’s tendered rate. PPC’s tender is 84 c/km including VAT. National Government recently capped the e-toll tariffs in Gauteng at 30 c/km including VAT. If motorists in the Western Cape and Gauteng were to be charged the same, then SANRAL would have to pay PPC a conservatively estimated R29 billion – in addition to the tolls which motorists would have to pay to PPC. SANRAL’s contingent liability is more than what it would cost SANRAL to construct the upgrades proposed by PPC and to continue maintaining and operating the N1 and N2 freeways as it currently does. SANRAL and the National Government never considered this massive risk and were unaware of it until the City discovered it when analysing the documents which SANRAL tried to keep secret

I cannot predict the outcome of the arguments that will ensue in the days ahead, but I remain reasonably confident and optimistic. The fight to prevent urban tolling will not end with this hearing, nor with this case.

It will take all of us who are opposed to the inequity of this scheme to stand together, to voice our objections, and to fight to prevent it. I am of the firm view that the proposed Winelands Toll Scheme is as irrational, reckless and dangerous to our future as the Gauteng e-tolls scheme was and is.

The people of Gauteng took a firm stand against the scheme that was imposed on them. I am calling on the people of Cape Town to do the same.